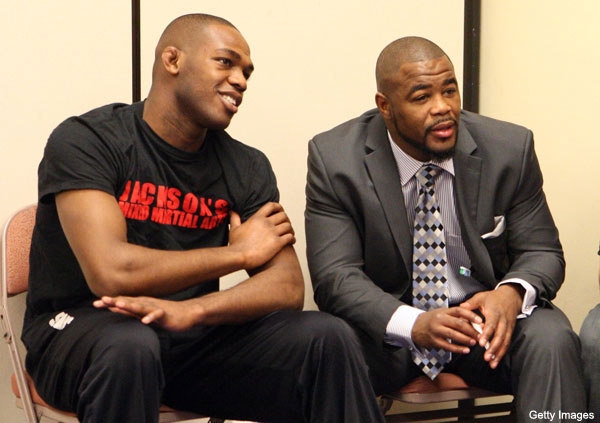 After storming to the UFC light heavyweight title, Jon Jones is being held up as god's gift to the MMA world. That's not the way Rashad Evans sees him.

"People want to say 'oh my God Jon is this and that' but Jon Jones is Jon Jones to me. He's another fighter I have to face. I've seen them all and I've trained with the best," Evans told Duane Finley of BloodyElbow.com. "I've seen all the shades of greatness and how this one was supposed to do this and this one was supposed to do that. It's all the same and it doesn't even matter."

He thinks Jones is not be to be trusted and has the feel of a master manipulator.

"I feel disrespected on many levels and the worst part is that it comes from people who I felt were like family. I would have done anything for Greg Jackson, and I would still do anything for Greg Jackson but I felt disrespected beyond belief," Evans said. "I feel disrespected by Jon because when I think about when we trained or when we were chilling, was the [expletive] even real? Or was he just trying to be a master manipulator and try to manipulate the situation so he could get what he wanted out of it?"

Evans is steaming about the fact that he welcomed Jones, another light heavyweight title contender into Jackson's Submission Fighting camp in Albuquerque, NM, with open arms. It's put Evans in a position that forces him to leave the only camp he's known since 2005.

Evans became so wary of Jones and Greg Jackson that he began training a lot more in Denver at the Grudge Training Center, a partner of sorts with the Jackson's camp in New Mexico.

"I told him straight up that I didn't like it. I told him that the kid was talented and that the sky was the limit with him but that was the type of guy I wanted to fight not train with. Greg came back saying, 'No, no, no this will be just like you and Keith [Jardine] where he will be just like a brother.' I still told him that I didn't want to do that," Evans said. "Then Greg said if that situation ever did arise between Jones and I that he would have to turn the fight down because that's how it works. He would have to turn down the fight with me so that way I wouldn't be put in a position where I looked like a punk. That's how it works in the Greg Jackson system."

Evans is annoyed with Jackson because he's essentially removed himself from the beef.

"You can't say you are not going to have anything to do with it when you are a big part of the reason why the situation originated," Evans fired. "That's like spilling a glass of milk and then walking away and saying that you don't want to have anything to do with it. You [expletive] spilled the milk...so you're at least going to help clean it up right?" 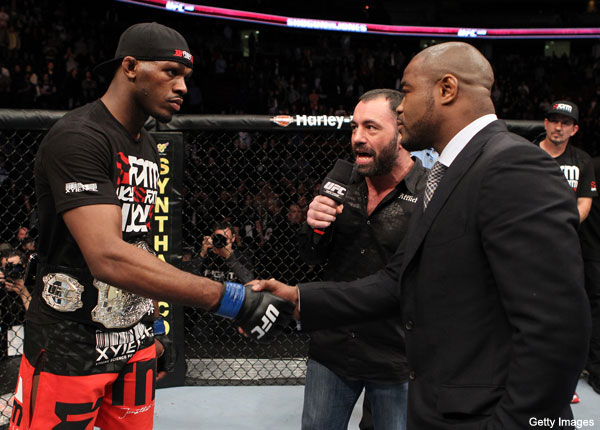 Evans didn't like the way Jones opened the door to a possible fight during the UFC 128 prefight. Jones said he was cutting off all questions about Evans and didn't feel like his teammate and friend was pulling for him to win.

"When the first opportunity came and he said that he would fight me if Dana said so, that to me stung more than anything. He said that he didn't want to lose his job and look man, the UFC isn't going to fire anyone because they are turning down fights," Evans said. "[...] Then he comes across on national TV and says that he will fight Rashad if Dana White tells me to and I felt so [expletive] utterly disrespected."

"I mean it's one thing to say something in an interview but the least you could have picked up the phone and been like, "man I did an interview today and they kind of put me on the spot with a rough question and I answered it this way." At least give me the heads up so that way I know and not look at it if he's Judas or something. You know who Judas is? That interview was some backstabbing [expletive] but now it's like whatever because now I know the game he is playing."

Evans takes nothing away from Jones' game, but his character ... is another issue.

"Now the question is would Jon Jones be an animal had he not trained with Greg Jackson? Yes he would've. The learning rate may not have been as fast because training with Greg allowed Jon access to train with the best in the world. Jon is hands down [expletive] phenomenal. The kid is amazing and there is no doubt about that. There is no shame in my game for saying because the kid is very good but his skills excelled much quicker because of Jackson's," Evans said. "But if Jon Jones down the road goes somewhere else for a camp and then has a great fight and an opportunity arises do you really think he's going to go back to Greg Jackson? No. So then Greg lost on two fronts and for what?"

According to Evans, Jones may feel the same sting down the road when he finally suffers a legitimate loss and needs a helping hand to get back on his feet.

"People are touting Jon around like he's Neo from the Matrix. That's all good and dandy but be there for the kid when the kid falls. Be there to pick him back up rather than turn their back on him like they did to Machida. Lyoto loses and all of a sudden he sucks. No he doesn't [expletive] suck it's just the way the game goes."

The Jones-Evans matchup probably won't materialize until the summer. That's a lot of time for Evans to unleash plenty of mental warfare. In fact, it's already started.

Nobody is supreme in this game and that is what makes mixed martial arts what it is today. Nobody is the absolute best. Anybody can get beat by anybody on any given day."