Ronda Rousey: ?I try to have as much sex as possible before I fight?

UFC/Strikeforce women's bantamweight champion Ronda Rousey appeared on Jim Rome's show on Wednesday. What does the champion use as her training secret? Does she have high-level training methods not available to amateur athletes and workout warriors? 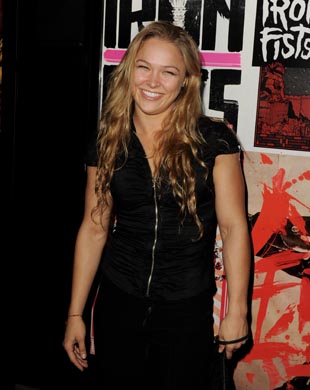 Nope. She likes to have as much sex as possible before fights. Though Mick advised Rocky that women weaken the legs, Rousey believes it has the opposite effect on women.

"For girls it raises your testosterone, so I try to have as much sex as possible before I fight actually. Not with like everybody, I don't put out like a Craigslist ads or anything, but if I got a steady I'm going to be like, 'Yo, fight time's coming up,'" Rousey said.

She is not the first athlete to claim sex has benefits on the field of play. Elias Figueroa, a Chilean soccer player, said his coach advised him to have sex before important games. Argentinian soccer players were advised they could have sex during the World Cup, as long as it was with a regular partner and not accompanied by champagne.

There is little medical evidence that says sex has an effect, positive or negative, on an athletic performance.

"It certainly doesn't fatigue you in any particular way. So if we actually test your strength or your endurance the day after you've had sex, there's no effect," said Ian Shrier, a sport-medicine physician at the Jewish General Hospital at McGill University.

But if there is an exception, it's in combat sports like MMA. Maria Cristina Rodriguez Gutierrez, the director of sports medicine at the National Autonomous University of Mexico, told CNN that sex can reduce aggression.

"For combat athletes like fighters or boxers, having sex before an important fight can reduce the aggressiveness and make them passive," although effects vary from person to person.

It clearly works for Rousey, who has steamrolled every opponent she has faced on her way to the championship and a 6-0 record. She's won every fight with a first-round submission, and she recently was named the first woman in the UFC. Though her opponent and the date for her first UFC fight are currently unknown, UFC president Dana White said her bout will be a main event on a pay-per-view.

Rousey is also a two-time Olympian, and she won a bronze medal for judo in 2008. It was a fight before the Beijing Olympics that made her think she could be successful in the cage.

"Yes. I got in a fight with a couple of guys at the end of 2007 in a movie theater. It was four couples so four guys and one girl tried to get into it. And I had two friends with me. But I was only really handling two guys by myself. They sued me for assault because it didn't really go too well for them. I guess if you lose a fight in Santa Monica the next option is to sue. Everyone in the theater was cheering for me. I was thinking I might have a future in this. It was before the whole MMA thing."