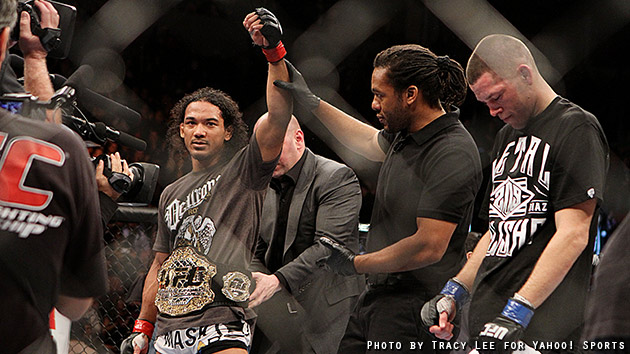 The UFC lightweight champion Benson Henderson held on to his belt with a dominating performance over Nate Diaz at the Key Arena in Seattle on Saturday night. Henderson took the five-round bout 50-43, 50-45, 50-45. Henderson landed 133 significant strikes throughout the bout.

Henderson set the tone early when he got a takedown and stood over Diaz before landing shots. Throughout the round, Henderson peppered Diaz with leg kicks. It caused damage early and throughout the bout.

Diaz showed signs of life in the third round with leg lock and heel hook submission attempts. Both �times Henderson was able to get out. Late in the round, he dropped Diaz, who continued to try for leg submissions.

At the end of the fourth round, Henderson jumped around and showed how fresh he was while Diaz had to get his eyes checked by the fight doctor. Henderson had a big takedown in the fifth, and continued to control Diaz throughout the round.

When the fight was over, Henderson reportedly walked over towards the media on press row and shouted to them:

This was Henderson's second title defense. He is undefeated since joining the UFC and has a record of 17-2. His last two bouts were razor-close decisions, but with this fight, Henderson has a signature performance to show he is deserving of the UFC's shiny, gold belt.

Going into this fight, Diaz had three wins at lightweight. Two were by submission, but his submission skills didn't work on Henderson. Diaz falls to an overall record of 16-8.